Following The Murphy Beds’ May 2019 concert at ufaFabrik Internationales Kulturcentrum, Jefferson Hamer will return to Berlin to present his solo work at Artliners Berlin.

Jefferson Hamer is a songwriter, guitarist and traditional musician based in Brooklyn, NY. His captivating voice, great ear for harmonies, and melodic guitar playing make him a sought-after collaborator. In 2014, he and songwriter Anais Mitchell won the BBC Radio 2 Folk Award for their album „Child Ballads“, a subtly arranged collection of new adaptations of English and Scottish folk songs.

His duo with Eamon O’Leary, The Murphy Beds, has toured extensively across the USA and Europe, opening for Glen Hansard, Bonnie ‘Prince’ Billy, Beth Orton, and Sam Amidon. He recently recorded with grammywinning folk artist Sarah Jarosz, and has released LPs with Laura Cortese and the six-piece Electric Roots Ensemble Session Americana. He also co-produced their 2016 album „Great Shakes“.

The songs on his solo debut album “Alameda”, which was released in Europe in early 2019, are largely road stories, celebrating the lives of people on the fringes of society. For The New Yorker, Robert Sullivan writes, “‘Alameda,’ the title track on Hamer’s album, is a rock ballad with crispy guitar licks and geographic lyrics about a wandering worker, who is maybe the author, but maybe not. In the way that it talks about a long search for work, it reminds me of Woody Guthrie’s Columbia River song series…” Propelled by tasteful electric and acoustic guitar, Hamer’s rapport with the traditional ballads (he is a regular singer and guitar accompanist at several weekly NYC Irish music sessions) shines on original narratives like ‘Alameda’ and the sweeping ‘Champlain,’ a cross-country love story that begins lakeside on the border between Vermont and New York. 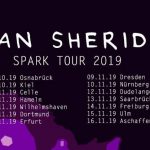